Recently, Michael Noirot who edits the blog This Mighty Scourge, had an opportunity to interview the Civil War Preservation Trust's president, Jim Lighthizer. Jim spent 50 minutes with Mike providing an update on the CWPT's activities. It is a great interview and provides some good information on the activities and success of the CWPT. See the article and listen to the interview at Mike's blog here.
Posted by Jim Rosebrock at 5:40 PM No comments: 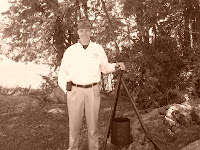 One of my original intentions when I introduced this blog in January was to center my posts around quotations made by and about the personalities who were a part of the Maryland Campaign. To some extent, my journey has taken me in a slightly different direction. I have spent much more time than I previously imagined displaying photos and videos taken around Sharpsburg and South Mountain. I have received many nice comments from folks about these photos and will continue to post more in the future. However, a core component of my Civil War study has been the quotes that I discover in my reading and that I subsequently collect. These have not been as prominent on this blog as I originally hoped, expect as part of my occasional update of the quote count on the left column of this blog, and the “Today's Quote” which I have never come anywhere near to posting every day. But while I have not been posting as often, I have been working hard on my quote collection. The collection work has occupied more time than I expected, often at the expense of my writing here. But I am pleased to say that I now have over 500 quotations from 73 different Civil War personages, most who figure largely in the Battle of Antietam. My collection also includes quotes that are not attributable toward a person but address for example the severity of the fighting at Antietam. Those are just grouped under a general "Antietam" subject heading. Currently the collection is in an Excel spreadsheet with columns for:


This organization makes this pretty easy to sort but as the spreadsheet grows, it is becoming increasingly more cumbersome to manage, or at least for me it is. I have been asked if I intend to somehow make my collection available on line. That is the plan but I haven’t quite figured out how to do that. Anyone out there with an idea on how I can do that should send me a comment.

The other thing that took me away from my work for an extended period was the passing of both my parents – my Dad in February who I mentioned in an earlier post, and my dear Mother on May 1. Not a day goes by that I don’t think of either of them but I would like to believe that they are now urging me to pick up the pen, or in the 21st Century variation of that – open the lid of the laptop – and get back to work. So that is what I intend to do. It is good to be back.
Posted by Jim Rosebrock at 9:48 PM 2 comments: