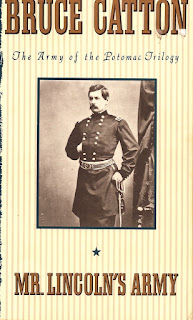 I had occasion this week to refer back to Mr. Lincoln’s Army, volume one of Bruce Catton’s landmark work on the Army of the Potomac.  I recently talked to one of my colleagues about the writing style of modern Civil War authors.  Much of it is certainly historically accurate but has an element of dryness and structure that makes it difficult to enjoy.  My friend is actually going back to read Shakespeare to improve his own prose style.  Maybe I should do that as well.  It is no wonder that some of the best Civil War history is written by journalists like Bruce Catton and Douglas Southall Freeman.  It was Catton’s work that ignited my interest as a youngster some 45 years ago and I am still drawn to it.  Without ever having to been to Antietam as a twelve year old, I could visualize it thanks to passages like these I offer below.  This post today, is nothing more than an opportunity to go back and enjoy some of the beautiful writing that I dare say many of you read and which drew you into your own study of the Civil War.  All of these passages beautifully evoke the early morning dawn of September 17, 1862 on the fields north of Sharpsburg but the second one is my favorite.

"There was a tension in the atmosphere for the whole army that night.  Survivors wrote long afterward that there seemed to be something mysteriously ominous in the very air-stealthy, muffled tramp of marching men who could not be seen but were sensed dimly as moving shadows in the dark; outbursts of rifle fire up and down the invisible picket lines, with flames lighting the sky now and then when gunners in the advanced batteries opened fire; taut and nervous anxiety of those alert sentinels communicating itself through all the bivouacs, where men tried to sleep away the knowledge that the morrow would bring the biggest battle the army had ever had; a ceaseless, restless sense of movement as if the army stirred blindly in its sleep, with the clop-clop of belated couriers riding down the inky dark lanes heard at intervals, sounding very lonely and far off."

"And while they slept the lazy, rainy breeze drifted through the East Woods and the West Wood and the cornfield, and riffed over the copings of the stone bridge to the south, touching them for the last time before dead men made them famous.  The flags were furled and the bugles stilled, and the hot metal of the guns on the ridges had cooled, and the army was asleep-tenting tonight on the old camp ground, with never a song to cheer because the voices that might sing it were all stilled on this most crowded and most lonely of fields.  And whatever it may be that nerves men to die for a flag or a phrase or a man or an inexpressible dream was drowsing with them, ready to wake with the dawn."

"The morning came in like the beginning of the Last Day, gray and dark and tensely expectant.  Mist lay on the ground, heavy as fog in the hollow places, and the groves and valleys were drenched in immense shadows.  For a brief time there was an ominous hush on the rolling fields, where the rival pickets crouched behind bushes and fence corners, peering watchfully forward under damp hat brims."
Posted by Jim Rosebrock at 8:21 AM 2 comments:

I just came across a great upgrade of Stephen Reckers Virtual Antietam website that now includes a blog.  Stephen is a fellow battlefield guide at Antietam who helped me get my start as a guide four years ago.  He has many great projects that are ongoing including his long awaited book Rare Images of Antietam, Vol. 1  that he says will be coming out in July of next year.  Check out Stephens important work here.
Posted by Jim Rosebrock at 8:41 PM No comments:

Several years ago, I attended a terrific one-day course by Edward Tufte, professor at Yale University and author of Envisioning Information, Visual Explanations, and The Visual Display of Quantitative Information. Tufte used Charles Joseph Minard’s chart plotting Napoleon’s March to Moscow during the War of 1812 as an example of perhaps “the best statistical graphic ever drawn.”  I was so taken by this depiction that I have since purchased and framed this chart.  It now hangs in my office at home as a constant challenge to be innovative in portraying information.  If you ever have an opportunity to attend a Tufte seminar, run don’t walk.

I have lately become interested in exploring the relationships of the West Pointers that served at Antietam on both sides of the battle.  A terrific website by Bill Thayer at the University of Chicago introduced me to Cullem’s Register.  The Register is a compendium of the service records of thousands of West Point graduates over the years.  I further contacted the West Point library and obtained a link to the pdf files of the register.

What I have been doing (to the neglect of other projects sadly) is sifting through this mass of data to extract a list of every West Point graduate who fought at Antietam or served in some capacity in the Maryland Campaign.  There some 193 men on the list ranging from Joseph K. F. Mansfield, number 2 in the class of 1822 to Charles N. Warner, number 28 (and Immortal) in the Class of 1862.  I created a table that summarizes their military careers, regimental assignments, stints at West Point as faculty members, war service (in Mexico, Florida, Utah, Spanish American War and yes even World War One), home states, and other things.  For the more obscure men, I have reviewed OR 19 and 51 to see if they are mentioned, and amazingly many of them are.  I have drawn out some interesting correlations about their careers that I look forward to sharing.  This effort has taught me a lot about the Regular Army in the antebellum period before the Civil War and much about post war assignments as well.  With Minard’s chart on the War of 1812 (the European War of 1812 that is) in mind, I attempted to depict some of this information on a chart of my own.  It is essentially a diagonal time line from the Class of 1822 (top left) which was Mansfield's class to the Class of 1862 (bottom right) that sent 14 newly minted second lieutenants to the battle including young Charles Warner.  Generally the colors above the line reflect United States or Confederate States affiliation during the war.  The green lines are periods when the specific officer taught at West Point.  The white spots which drift from the top of the chart halfway across the top are Mexican War officers who received brevets for gallantry.  The colors below the time line diagonal are the regimental affiliations of the officers.  Light red is artillery, light blue is infantry and gold is cavalry.  Engineers, topographical engineers and ordnance officers are also shown.

The initial objective was to group cadets by year group showing not just who they graduated with, but who were other students in upper and lower classes when they were at the academy.  I call this relationship spans of connection.  For example, members of the class of 1846 (the big black box in the upper left quadrant) as fourth year cadets in the fall of 1842 would have known cadets who would graduate as the class of 1843.  Four years later  as first year cadets themselves, these men would have known the fourth year cadets who would go on to graduate in 1849.  After their own classmates, they were likely closest to classmates in the classes of 1845 and 1847 (the red boxes).  The colors are less dark as you move away from 1846 (orange, gold, yellow).   Cadets in the five year program of the late 1850s would have even larger spans of connection.  This effort alone was very illuminating.  There is much more that I will address down the road but here is a peak at the chart.  Stay tuned.

Posted by Jim Rosebrock at 10:51 AM No comments: