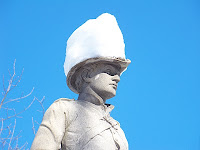 In the short break between snowstorms, my daughter Rachel and I escaped from our snowbound house yesterday and got some pictures of a wintery Antietam Battlefield and Harper's Ferry. We said hi to Rangers Mannie Gentile and John Hoptak manning the Visitor's Center. Needless to say, it was a quiet day and we had the battlefield all to ourselves. Rachel is a very good photographer and a number of these snowy scenes are hers. We are back inside as the next storm starts to blow out there. Enjoy the pictures of familiar views once again covered in a snowy blanket. 40 days until spring (I think). 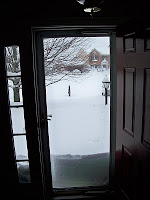 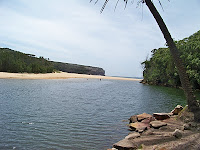 Being socked in this weekend with 28 inches of snow here in Jefferson Maryland, I have had a bit of time to return to my neglected Antietam blogs. This is quite a contrast to last weekend when I was in Sydney Australia traveling to a conference. These two pictures, the first taken last Sunday of the Australian Pacific coast south of the Sydney, and the second, a view out of my front door on yesterday offer a contrast of where we would certainly like to be and where we are now. In the dead of winter with no apparent hope of a quick release into spring's embrace, I spent the weekend compiling many of the quotes that I collected by soldiers on both sides who fought at the battle of Antietam. Below is a selection of some of my favorites. The entire collection is found at Antietam Voices.

a confederate staff officer commenting on the invasion of Maryland

“Never were want and exhaustion more visibly put before my eyes, and that they could march or fight at all seemed incredible.”

“those corn acres of hell.”

“brought down the enemy as grain falls before a reaper

“the hottest place I ever saw on this earth or want to see hereafter…The dogs of war were loose, and ‘havoc’ was their cry

One of Hood’s Texans

One of Hood’s Texans describing their attacks through the Cornfield. Confederate Veteran, 22 (1914) : 555

“It was horrible in the extreme to witness the men with mangled limbs and bodies making their way to the rear….The whole face of the country seemed covered with them.”

Comments by a Virginia soldier

“the incessant explosions of artillery, the shrieking whistles of the shells, and the sharper, deadlier more thrilling roll of musketry; while every now and then the echo of some charging cheer…and as the human voice pierced that demoniacal clangor, we would catch our breath and listen.”

How the battle sounded from Shepherdstown, 4 miles away

“The Federals in apparent double battle line were moving toward us at charge bayonets, common time, and the sunbeams falling from their well-polished guns and bayonets gave a glamour and a show at once fearful and entrancing.”

Staff Officer in the Stonewall Bde

A staff officer of the Stonewall Brigade noting the Union advance through the Cornfield. Confederate Veteran, 22 (1914) : 66

“a seamless wall of canister”

“For a time the loss of life was fearful. We had never seen anything like it.”

“pouring in a sweeping fire as they advanced, and our men fell like sheep at the slaughter”

a member of the 4th RI

all realized that there was ugly business and plenty of it just ahead.”

“The shouts of our men, and their sudden dash toward the sunken road, so startled the enemy that their fire visibly slackened, their line wavered, and squads of two and three began leaving the road and running into the corn.”

a soldier of the Irish Brigade

A soldier of the Irish Brigade describing their last attack

“I thought I had seen men piled up and cut up all kinds of shape, but never anything in comparison to that field.”

“The Confederates had gone down as grass falls before the scythe. They were lying in rows like the ties of a railroad, in heaps, like cordwood mingled with the splintered and shattered fence rails. Words are inadequate to portray the scene.”

a northern correspondent reaches the bloody lane on Sep 18,1862

“With fixed bayonets [at] the double quick, [they] passed through a narrow opening in a strong chestnut fence-which there was no time to remove-and charged in the most gallant manner directly up the road to the bridge. As the attacking party led by Colonel Griffen debouched from the field into the road, the rebels from heir entrenched position, redoubled the fury of their fire, sweeping the head of the column with murderous effect. Of the first hundred men who passed through the opening in the fence, at least nine tenths were either killed or wounded. Such sweeping destruction checked the advancing column, but the men sheltered themselves behind logs, fences, and whatever other cover they could find, and bravely held the ground already gained. 6th New Hampshire soldier

Action at the Burnside Bridge during attack by 6th NH

Description of 12th Corps bivouac site night before the battle