The "Lost Paragraphs" of Special Order 191 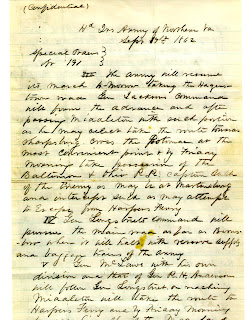 The copy of Special Order 191 that was found by Sergeant John Bloss and Corporal Barton Mitchell and put into the hands of General McClellan is now on display at Monocacy National Battlefield in Frederick.  I was privileged to attend the ribbon-cutting ceremony for the new exhibit on Friday.  On hand beside the bevy of V.I.P.s were descendents of the Bloss and Mitchell families.  They contributed a number of previously unseen letters and artifacts to the exhibit. It was exciting for me to see such an important part of history and something so key to the Maryland Campaign.  We owe a debt of thanks to everyone who made the exhibition possible.

On Sunday when I was working at the Antietam Visitor’s Center, a sharp-eyed visitor asked why the copy of the Lost Order on display begins with paragraph III.  Look closely at the order here.  Was that a typo?  Where are the “lost” paragraphs?

In its entirety, Special Order 191 does in fact have paragraphs I and II.  However, these paragraphs, which dealt largely with administrative matters not important for the combat commanders, were omitted from the copy written for D. H. Hill.  The copy, written out for D.H. Hill by Jackson from his original, also does not contain these paragraphs.  Here are the “lost” paragraphs:

I.               The citizens of Fredericktown being unwilling while overrun by members of this army, to open their stores, to give them confidence, and to secure to officers and men purchasing supplies for benefit of this command, all officers and men of this army are strictly prohibited from visiting Fredericktown except on business, in which cases they will bear evidence of this in writing from division commanders. The provost marshal in Fredericktown will see that his guard rigidly enforces this order.

II.             Major Taylor will proceed to Leesburg, Virginia and arrange for transportation of the sick and those unable to walk to Winchester, securing the transportation of the country for this purpose. The route between this and Culpepper Court-House east of the mountains being unsafe, will no longer be travelled. Those on the way to this army already across the river will move up promptly; all others will proceed to Winchester collectively and under command of officers, at which point, being the general depot of this army, its movements will be known and instructions given by commanding officer regulating further movements.
Posted by Jim Rosebrock at 11:58 AM 3 comments:

It is not novel to say that the Civil War was almost unique in that so many of the senior leaders were classmates and frequently close friends with their opponents.  This was largely due to their West Point connections and prior service in the Regular Army.   Of the 197 officers that I am aware of that fought at the Battle of Antietam or otherwise supported the Maryland Campaign, 48 attended West Point when George B. McClellan was a cadet.  It is normal to see in an officer’s biographies that authors often state who they graduated with at West Point.  Take that a step or two further.  Who was also at West Point when they were students their entire time.  In a four year curriculum like that at the Academy in the 1840s, a man would be connected with a total of nine year groups of cadets.  He would certainly know the men in his class the best.  But for men who arrive in the year immediately before or afterward, he would be spending three years of his life with them as well.  Men in these classes would also often be best of friends.  Look at the table.

The Class of 1846 contains such well-known officers as McClellan, Reno, Couch, Jackson and Sturgis (if you only count division commanders or higher.)  McClellan also had very close friends in the classes that graduated before and after him.  Consider William Franklin (1843), Baldy Smith (1845), Fitz-John Porter (1845), and at one point his best friend Ambrose Burnside (1847).  Many of the less known officers will appear on McClellan’s staff.  Commanders had much leeway in who they selected for their official military family and would certainly have chosen men who they got along with or who they were associated with previously.
From the class of 1843 came officers who were present at West Point when McClellan was a fourth year cadet.  They include his Chief of Commissariat Colonel Henry Clarke, Chief Quartermaster Lieutenant Colonel Rufus Ingalls, and Assistant Adjutant General James Hardie.  The Inspector General of the Army was Colonel Delos Sacket from the Class of 1845.  Also from that class was McClellan’s Assistant Provost Marshal, Major William Wood.  From his own graduating class came Major Nelson Davis, an assistant inspector general.  McClellan’s chief engineer Captain James Duane came from the Class of 1848 as did one of his many aide-de camps Lieutenant Colonel Edward M. Hudson.  These were third-year men when McClellan graduated.  Coincidence?
There were only six officers in this range of years who would don the gray uniform.  Two of them Stonewall Jackson, and A.P. Hill undoubtedly were among the greatest commanders that served the rebels.  McClellan was very close to Hill and knew and respected Jackson’s work ethic and attention to his studies. Additionally, Confederate division commander David "Neighbor" Jones graduated with McClellan.  Ohio-born rebel Roswell Ripley graduated after McClellan's first year.  Brigade commander Nathan "Shanks" Evans and Albert Cummings (who commanded Cadmus Wilcox's brigade of Richard Anderson's division) were underclassmen during Little Mac's tenure.
When I array this kind of information in various ways, it is fascinating how the names line up and the relationships emerge.  I won’t offer any further analysis (for now), but take a look yourself and make your own conclusions.
Posted by Jim Rosebrock at 3:42 PM 3 comments:

I awoke this morning to find that the combined odometer on my two blogs South From the North Woods (SFTNW) and Antietam Voices (AV), rolled over the 100,000 hits milestone.  These two blogs are something that I have really enjoyed working on over the past four year.  I have many more ideas than I have time to post so I am sad that I don’t get to spend time with my babies like I really want to.  Thanks to the loyal group of friends out there who take the time to look in on SFTNW and AV now and then.  I appreciate the support and interest.  Stay tuned… and just 47 days to the 150th!
Posted by Jim Rosebrock at 8:24 AM No comments: