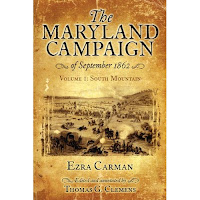 Tom Clemens, perhaps the subject matter expert on the Maryland Campaign has joined the blogosphere with his new blog The Maryland Campaign of 1862. Tom's blog will focus on Gen. Ezra A. Car­man and his 1,800 page man­u­script his­tory of the cam­paign. Savas-Beatie LLC will release the first vol­ume of Tom's edition of the Carmen manuscript on May 15, 2010. The first vol­ume con­tains the chap­ters lead­ing up to the bat­tle of Anti­etam and includes the plans of both com­man­ders, the pre­lim­i­nary move­ments of both armies and the bat­tles of South Moun­tain. A sec­ond vol­ume will include the bat­tle of Anti­etam and the imme­di­ate aftermath. I am looking forward to learning more about Carmen and his work at Tom's new blog and I wish him every success in this undertaking. I have added Tom's blog to my list of favorites here and at Antietam Voices .
Posted by Jim Rosebrock at 9:11 PM No comments: 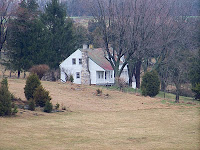 Here is the link to all the living history events, hikes and other activities at Antietam National Battlefield this year. I will soon be posting photographs of this years Irish Brigade hike which occured this past Sunday. Come out to the park this year and enjoy the beauty and history of Antietam.
Posted by Jim Rosebrock at 3:10 PM 2 comments:

Getting Ready for Spring 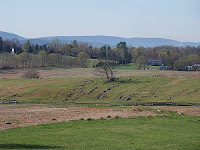 Spring at long last is slowly and tentatively returning. The longer days and warmer sunshine melt the great piles of snow that still hold my front yard in a glacier like grip. My mind turns more and more to anticipating my weekend volunteer activities at Antietam National Battlefield. Next weekend the spring hiking tours resume with a hike centered (not surprisingly as it is Saint Patrick’s Day) on the Irish Brigade at Antietam. This month we resume training of our volunteer historical interpreters who man the Napoleon gun in Battery B, 4th United States Artillery and the muskets of the 3rd Maryland Infantry. Their programs will debut the last Saturday in June and run through September.

For me an essential part of preparing for the new season is pulling out what I believe is the definitive work on the Maryland Campaign. Over the past month, I re-read Joseph Harsh’s classic Taken at the Flood – Robert E. Lee & Confederate Strategy in the Maryland Campaign of 1862 (Kent: The Kent State University Press, 1999). While perhaps not as well known as the other two comprehensive Antietam histories, Stephen Sears Landscape Turned Red, or even James Murfin’s Gleam of Bayonets, TATF is by far the most objective, comprehensive and best documented work of the three. While designed as a thorough, strategic focus of the Maryland Campaign from the point of view of Robert E. Lee, it nevertheless treats George B. McClellan’s actions as objectively as I have ever seen in print. Harsh who grew up in Washington County knew the ground intimately. His clear description of the terrain make it easy for me, an avid battlefield hiker and photographer at some level, to clearly visualize every place that he describes in the work. Sadly Harsh who intended to write an accompanying book from McClellan’s point of view and perhaps even another on the tactical level view of the battle, was never able to accomplish that. In the course of my study this year, I pulled eighty-three absolutely tremendous quotes from the book that I have added to my collection. Some of them will appear in Antietam Voices soon.

Perhaps one work that approaches Harsh in terms of objectivity and which provides a good look at the Federal side of the Maryland Campaign is Vince Armstrong’s Unfurl Those Colors McClellan, Sumner, & The Second Army Corps in the Antietam Campaign (Tuscaloosa: University of Alabama Press, 2008). While a detailed study of the Second Corps, Armstrong also provides what I believe is an objective look at McClellan’s plan and his actions for much of the day. In my mind, a great collection of detailed and skillfully etched maps, properly located in a book are the difference between a good book and a great book. Again, Armstrong like Harsh, do not disappoint here. He has some tremendous maps that I believe are essential to a study of this field. Armstrong’s work is not uncontroversial when it comes to his interpretation of French’s attack of the Sunken Road, but it is a position worth looking at with an open mind. Armstrong uses a large number of primary sources, soldier’s diaries and regimental histories that are also rich in evocative quotes. I understand the he is working on a companion piece that will detail the actions of the Confederates in the Sunken Road and West Woods. I look forward to seeing that work.

The other good book that I am reviewing again is McClellan’s War by Ethan Rafuse (Bloomington: Indiana University Press, 2005). I read the book a year or so ago, but every spring reread the chapters on McClellan’s resumption of command of the Army of the Potomac and his campaign in Maryland. Like Harsh, Rafuse provides an excellent chronological time line in this book, of McClellan’s activities in the days leading up to the Battle of Antietam. He is also very objective and provides a very accurate portrayal of McClellan acknowledging his character flaws but also respecting his great abilities as a planner and organizer and motivator of the men of the Army of the Potomac.

And next spring when I am doing this all over again, I will have two other books to add to my collection of reviews. In just a couple of months, Dr. Tom G. Clemens edition of The Maryland Campaign of September 1862 Volume 1 South Mountain will appear. Published by Savas Beatie, this work promises to be the definitive edit of Ezra Carmen’s long unpublished manuscript of the Maryland Campaign. I will have more to say when this one comes out. The other is Antietam September 17, 1862 that is authored by Antietam Ranger John Hoptak. It will be published by the Western Maryland Interpretive Association in the late spring of this year. John is the author of the important work Our Boys Did Nobly, Schuylkill County Pennsylvania, Soldiers at the Battles of South Mountain and Antietam.

So as this warm Sunday morning brings further promise of spring, I am heading for the battlefield. See you there!
Posted by Jim Rosebrock at 9:35 AM 4 comments: