The Cornfield, Copes and Me

Last Sunday afternoon in hot 95 degree weather, I set out for the Cornfield and snapped the photographs that you see below. I wanted to find a format where I could combine the photos with one of the Copes maps to get a better appreciation of what went on in that part of the Cornfield that I was standing on. I dont know if this is the best format and would therefore appreciate any input that you might have. I actually turned powerpoints into pictures to get the effect you see here.

What can quickly be seen is that by moving just a short distance in any direction, you will obtain a very different view. Look for example at the Poffenberger barn in those pictures that point north. The view varies from being able to see the entire structure, to just the top of the barn, to nothing at all. 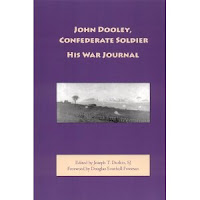 As we remember the Battle of Gettysburg this weekend on the 234th birthday of our nation, consider the words of Sharpsburg veteran John Dooley a young Irishman from Richmond who joined the First Virginia Infantry along with his father and brother. Dooley fought at South Mountain, Sharpsburg, Fredericksburg, and Gettysburg. Elected lieutenant before Gettysburg, he participated in Pickett's Charge on July 3 where he was shot in both legs and lay on the battlefield all night. Captured the next day, Dooley was released on February 27, 1865. His war journal is a great first hand account of the fighting in the Army of Northern Virginia.

This quote was made by Dooley on July 3. Pickett's Charge glorified mostly by those who never fought there has a different look from the eyes of an infantryman like Dooley. Here is the full quote as Dooley prepares to make the charge:

"Our artillery has now ceased to roar and the enemy have checked their fury, too. The time appointed for our charge is come. I tell you, there is no romance in making one of these charges. You might think so from reading 'Charlies O'Malley,' that prodigy of valour, or in reading of any other gallant knight who would as little think of riding over gunners and such like as they would of eating a dozen oysters. But when you rise to your feet as we did today, I tell you the enthusiasm of ardent breasts in many cases ain't there, and instead of burning to avenge the insults of our country, families and altars and firesides, and the thought is most frequently, Oh. if I could just come out of this charge safely how thankful would I be!"

Posted by Jim Rosebrock at 10:32 PM No comments: