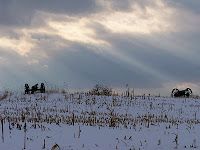 Monday was the shortest day of the year and hard to believe the days start getting longer now. For now, winter in all its might holds us in its grip. A record December snowfall blankets our area. All is still and quiet. At the battlefield on Monday, there were very few visitors. Rangers Mannie, Brian, and Gordie were at the Visitor's Center and Christie was at the Mumma Farm when I stopped by to snap some pictures.

More snow than has ever fallen in December covers us. It muffles the sounds and there is a stillness around the battlefield as much caused by the snowfall as it is by the lack of visitors

I was by the battlefield on Monday to capture some of the winter images and take advantage of the pale light that bathed the area today. Enjoy these photos, some of easily recognizable locations, and others of not so familiar places on some of the most sacred soil to be found in our land.

And while I am thinking of it, have a Merry Christmas and a Happy New Year.

Until Antietam The Life and Letters of Major General Israel B. Richardson by Jack C. Mason

Until now, scholarship on the Maryland Campaign has not included a biography of Major General Israel B. Richardson, commander of the First Division of the Union Second Corps. Richardson played the key role on the Union side in the Sunken Road at the Battle of Antietam on September 17, 1862. He was mortally wounded there.Jack C. Mason has filled that void with this work. Richardson was a rising star in the Army of the Potomac. His aggressive fighting style, outspokenness, gruff demeanor, and close connections to Michigan Senator Zachariah Chandler endeared him to the Radical Republicans. They increasingly saw Richardson, as a compelling alternative to the politically conservative and militarily cautious and orthodox George B. McClellan. Indeed, Mason submits that Lincoln’s visit to Richardson’s hospital bed after the battle amounts to almost a job interview for the Army of the Potomac top job. While we usually link McClellan’s relief to the November 4 midterm elections, it may actually be connected to Richardson’s death. It is an intriguing timeline. Richardson died on November 3, 1862. With hopes dashed that Richardson would recover so that he could name him as McClellan’s replacement, Lincoln, two days later on November 5, 1862, relieved McClellan and named Ambrose Burnside to command the army. Mason offers this hypothesis for our consideration.

The work is a very complete depiction of Richardson’s military career. While based largely on his personal letters and an unpublished manuscript that he authored about his antebellum army career, it contains other very interesting sources and is well footnoted. It clearly paints the picture of Richardson as one of the most experienced small unit infantry commanders in the old army. Mason emphasizes the importance of young Richardson’s mentors in the 3rd Infantry Regiment before and during the Mexican War. Richardson’s role in training his first Civil War command, the 2nd Michigan Infantry Regiment, participation in the Battle of First Manassas and his tense relationship with Colonel Dixon Miles are very well covered as is the key role he played in the Peninsula Campaign.

The book contains good maps of all of Richardson’s campaigns from both the Mexican War and Civil War and a number of rarely seen photographs of Richardson in the casual attire that he usually preferred. However, few details of his personal life, or the period between his resignation from the Army in 1857 and his return in 1861 are detailed. One exception is the whirlwind two-week courtship and marriage of Richardson to Fannie Travor on May 29, 1861, shortly before he and his bride departed with their regiment for Washington on June 8.

For me, the best part of the book is the story of Richardson’s last day on earth leading his division into the Sunken Road on September 17, 1862. It is well told and epitomizes Richardson at his best.

As unpretentious as Zachary Taylor and as determined as U. S. Grant, it is very likely that Richardson would have gone on to bigger and better things had he not been mortally wounded at Antietam. Jack Mason fills in many gaps about this very important Union officer. I strongly recommend this book to everyone interested in military biography and the Civil War.

Digging Into The Cornfield 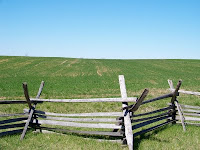 I am hoping to do a series of posts in the near future about the various brigades (Union and Confederate) that fought in the Cornfield. Right now I am looking at Abram Duryee's brigade of Rickett's Division. It is my first venture beyond reading books and extrapolating a post from my reading to looking for first person accounts. I am in touch with several county historical societies in New York looking for information on the 97th, 104th and 105th New York Infantry. I have access to Frederick Phisterer's voluminous New York in the War of the Rebellion, 1861-1865 as well. If any of you have any suggestions on how to proceed, I would be pleased to hear from you.
Posted by Jim Rosebrock at 8:59 PM 4 comments: 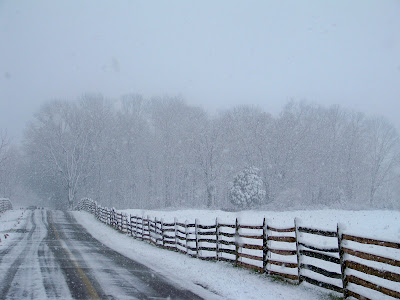 An early winter storm dumped several inches of snow on the Sharpsburg Maryland area yesterday in the midst of the annual luminary preparations. This photo was taken while the snow was flying on Smoketown Road looking south at the East Woods. The plowed field and pasture north of the Cornfield are to the right.
Posted by Jim Rosebrock at 9:27 AM 3 comments: