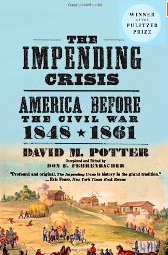 In his chapter titled the Political Parties in Metamorphosis, I read this passage on political parties.  Potter is discussing the Whig and Democratic parties in the decades before the Civil War.  In view of repeated failures of our modern legislative branch to legislate, (the Super Committee being the latest example) I found Potter’s words on the characteristics of the American political parties very interesting.  I keep coming back to this paragraph on page 226.

Relatively unencumbered by ideological mission, the two parties did not have enough intellectual focus to offer voters clear-cut alternatives.  Thus they failed in one of the classic functions theoretically ascribed to political parties. But if they defaulted in this way, they performed admirably another equally important if less orthodox function: the promoted consensus rather than divisiveness.  By encouraging men to seek a broad basis of popular support, they nourished cohesiveness within a community and avoided sharpening the cutting edge of disagreement to dangerous keenness.  Without ideological agreement as a basis for cohesiveness, the parties could still cultivate unity, based upon the practical need that diverse groups may have for one another’s support.

I rarely use this blog as a political forum.  However, I truly believe that we are at the other end of the pendulum these days.  There is to much intellectual focus.  The alternatives are clear-cut nowadays.  But what our leaders seem to posses in abundance in clarity of position, they forfeit in ability to promote consensus and fail to seek broad basis of popular support.  The American people clearly recognize the problems.  But our leaders seem incapable of working together to make decisions. Now this very divisiveness that is so well promoted in the 21st century could very well mean our decline.  Nothing is getting done.  We cant stand further putting off of the key decisions that need to be made right now. Henry Clay, John Q. Adams, Daniel Webster, Stephen Douglas, and John Calhoun have been replaced by Harry Reid, Mitch McConnell, John Boehner, and Nancy Pelosi, prisoners of their own special interest keepers.  There are many times to hold firm to our ideological standards but surrendering any idea of compromise or bipartisanship all the time is unacceptable.

Impending Crisis then or now?  But that’s just me.
Posted by Jim Rosebrock at 3:58 PM No comments:

The Marine Corps is 236 Today. Thanks to one Marine in Particular

Today is the birthday of the United States Marine Corps and tomorrow is Veteran's Day.  I am particularly proud of one Marine today.  That is my son Jim who has now been serving proudly in the Corps for over one year.  Jim attended his first Marine Corp's birthday party last weekend and the photo here shows him with some of his comrades at the party.  Jim, now a lance corporal, keeps the AV-8B Harrier II jump jets flying in Marine Attack Squadron 513 (VMA-513) stationed Marine Corps Air Station - Yuma Arizona.  Many of Jim's fellow Marines in the 513th are returning from a deployment in Afghanistan.

Several of Jim's high school friends that I know serve now.  One is a United States Army Ranger enroute to a deployment of his own after Thanksgiving, and another is finishing up boot camp at Parris Island.  Another will be commissioned as Army lieutenant out of ROTC next spring.  Five years ago, I took these boys to the Boy Scout Philmont Camp in New Mexico.  Now they proudly serve their nation.

To those who have little positive to say about the young of this generation, I say look at men like Jim who are laying it on the line everyday.  As an old paratrooper, I know that they have learned the same lesson that I did many years ago - that the best in life is earned, not handed to you.

Lets not forget our veterans this weekend -  all the soldiers, sailors, marines, airmen, and coast guardsman who put it on the line every day for us.  If you see one thank one.  And better yet, don't just do it on Veteran's Day.  Go out of your way to make every day Veteran's Day.
Posted by Jim Rosebrock at 10:46 AM 2 comments:

Antietam volunteer Dave Maher shot this great video from his car yesterday. It covers about the first five auto tour stops at Antietam National Battlefield.  The crystal clear skies and beautiful fall foliage are really accented here.  The video is in real time.  Dave, I am looking to more footage soon.  Thanks again.
Posted by Jim Rosebrock at 11:37 AM 3 comments:

Today, I was honored by my colleagues at Antietam National Battlefield as the park's first ever Master Ranger Volunteer.  The award recognizes 500 hours of volunteer service in one year.  The cool thing is a distinctive patch that I get to sport around on my guide shirt.  Mannie also has a very nice post at his blog here.


It is great to be recognized for something you like to do but even greater to work with and be a part of the finest interpretive staff of rangers, volunteers, and guides in the Service.  While I say thanks to all of them for a job well done, I want to say a special thanks to Ranger Christie Stanczak, volunteer coordinator and very dear friend for making this possible.
Posted by Jim Rosebrock at 8:14 PM 4 comments:

Last weekend's SHAF workday to begin the walking trail up to the Eighth Connecticut and Ninth New York monuments was snowed out. There will be a work party this Saturday November 5th led by Antietam Ranger Joe Calzarette to work on this trail. Meet at the Antietam Visitor's Center at 9AM. Bring gloves, water, and dress for the weather. Right now the weather forecast looks good but as last weekend if there is a steady rain that morning, the event will be cancelled.

Posted by Jim Rosebrock at 9:47 AM No comments: