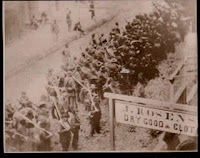 Over at Antietam Voices, I have added 124 new quotes about the Maryland Campaign. These are quotes about the campaign that don't fall under the specific battles of South Mountain, Harpers Ferry, Antietam, and Shepherdstown. Check them out here.
Posted by Jim Rosebrock at 12:31 AM No comments:

Sumner and the Joint Committee on the Conduct of the War