I am excited to have added the 3,018th quote to my database today. Read more about the process at Antietam Voices. I have also updated the George McClellan page and you can see 272 quotes about McClellan made by him and his contemporaries. I hope to similarly update the other principal Antietam commanders and also the quotes that apply to specific areas of the fighting in the upcoming weeks. Check it out.
Posted by Jim Rosebrock at 10:42 PM No comments:

Check out Antietam seasonal ranger Dan Vermilya's new blog Our Country's Fiery Ordeal here. I have added Dan's blog to my list on the right.

I got to know Dan last year when he started working at the park. He is a serious student of Civil War history and of the Battle of Antietam in particular. I think you will find his perspectives interesting and instructive. I look forward to working with Dan again this summer and wish him the best on this endeavor. The picture at the left is from Dan's photo collection.
Posted by Jim Rosebrock at 7:43 PM 1 comment:

A New Book on the Battle of Antietam

Last week, the Western Maryland Interpretive Association (WMIA) published the latest in its series of books on various aspects of the Civil War in this part of Maryland. Already released are volumes on the Battle of Monocacy, and the Antietam Farmsteads. Joining these titles is the Battle of Antietam September 17, 1862.

The latest work is a collaborative work of two Antietam rangers. John Hoptak wrote the copy for the book. Keith Snyder designed the layout, maps, and charts and masterfully enhanced the photographs and drawings that grace the book.

The book is more than just a tale of the bloody events of September 17, 1862 as the title would have you believe. It is the story of the entire Maryland Campaign told from its very beginnings on September 4, 1862 when the seemingly invincible legions of the Army of the Northern Virginia crossed the Potomac, to the retreat of the battered Confederate Army and the rearguard Battle of Shepherdstown fifteen days later.

John Hoptak has already established his reputation as an authority and well-regarded author on a range of Civil War topics. His challenge here was to reduce the Maryland Campaign and the Battle of Antietam to about 60 pages of text. The remaining 20 or so pages are the excellent maps, charts, and photos.

The result is a well-crafted overview of the campaign and a more detailed survey of the battle on September 17th, 1862. The Battle of South Mountain and Confederate capture of Harper’s Ferry as well as the events of the two days leading up to the battle are addressed. John’s treatment of George McClellan is fair and balanced and thankfully devoid of much of the stereotype that we see in much of the literature of this important figure. Likewise we see the battle from the perspective of Robert E. Lee and understand his decision to stand and fight outnumbered and with his back to the Potomac.

John covers the battle in about 30 pages. We see it not as a series of unrelated events on different parts of the battlefield as it is sometimes portrayed but as a seamless weaving together of the story with a good appreciation of how it all tied in together. Lesser-known parts of the battle are included, like Lee’s planned attack in the left in the afternoon, and the September 16 twilight action in the East Woods.

Given John’s penchant for biography, we are treated to brief vignettes of the principal commanders on both sides throughout the narrative.

Keith Snyder did a tremendous job with the maps. There are six for the battle itself covering different times of the battle. The maps really enforce the fact that there was action along the entire line for the entire day. They capture key elements of terrain, contour, and movement in a way that I haven’t seen before. I have already photocopied and laminated copies and stuck them in my already bulging guide haversack. Keith created several great organization charts that distill a great amount of information; he did a wonderful job touching up the photographs and drawings providing a new level of crispness and clarity to images many of us have seen in other works. There is also interesting information on the development of the park, presidential visits to the battlefield, and much more.

Without hopefully sounding to pompous, I cannot say that there was much new that I learned about the Battle of Antietam here. But the story is faithfully and accurately told. John and Keith have reduced an immensely complicated event in our history into a readable and informative work that should have widespread appeal and excite interest in new readers young and old on the topic. They got it right.

In the days and months ahead as I take groups out on tours I will as I sometimes do, find myself at a loss for words on how to reduce a complicated concept or event to an easier to understand level. When that happens I will reach for my copy of this very good book.

Taken at the Flood 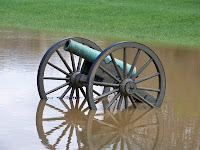 Pardon the pun. Yesterday a powerful storm dumped around two inches of rain on the Potomac River valley. The mountain back roads that I drive over Crampton’s Gap and Red Hill enroute to the park this morning were awash in gravel and rivulets from the storm. Modern Burnside Bridge Road was closed for a time due to the high water. I was anxious to see the Antietam Creek at the Burnside Bridge. There, I shot some video of the high water passing under the bridge. The video was taken from the east (Union) side of the bridge this morning. 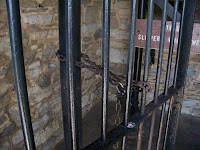 While there, I talked with Ranger Rory Moore who told me that lightning struck the observation tower on the Sunken Road (Richardson Avenue) melting the padlock and chain on the tower gate. The photo (left) of the lock doesn’t clearly show that but the lightning certainly fried it.

Our line was throbbing at every point, so that I dared not call on General Lee for help 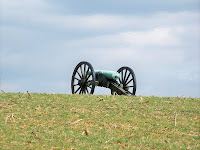 NOTE: This fact sheet was used for my accompanying article on Confederate Artillery posted above.

Wise (Wise 1959, p.298) gives Jones Bn. As 14 guns. But Jones stated to Carmen that his battalion consisted of 4 4 gun batteries, 1;6 guns aggregate, and 12 off., 290 EM=302 (Carmen MS, 23:35) Carmen (ibid., 24:12) gives Jones BC as 2 KIA, 15 WIA=17 TBC but he had no information on Turner’s and Wimbish’s batteries. Harsh finds little evidence that this battalion fought at Antietam, yet it is shown on the Copes maps, and is mentioned on one of the battlefield plaques. Jones did not submit a report. In the reorganization of October 1862, Jone’s takes command of D.H. Hill’s divisional artillery battalion and brings Pages and Peytons batteries with him.[2]

Turner’s (Co. D, Wise Legion Arty.) VA Battery Capt William H. Turner. Wimbish and Turner’s batts. Together had 5 or 7 guns, depending on whether the bn. Had 14 or 16 guns. Both batts. Were disbanded Oct 4, 1862 (Special Orders no. 209, ANV). According to Harsh, this battery was adjudged unfit to leave Virginia and so did not participate in the Maryland Campaign.[7]

Huger’s (Norfolk) VA Battery, Capt. Frank Huger; Lt. C.R. Phelps: 1 10-lb. Parrott RML, 1 3-in. Ordnance RML, 2 6-lb SBML. The battery was attached to Mahone’s Bde. (Pendleton 1862).[12] This battery was west of the Hagerstown road. Huger’s abandoned gun was found by soldiers of G.T. Anderson’s brigade and served by Lt Chamberlayne of the 6th Virginia. A marker has been placed near this position. Huger was a West Pointer, Class of 1860 who resigned on May 21, 1861. He was the son of Confederate General Benjamin Huger. He was 31st in his class and was assigned to the 10th Infantry Regiment. Huger was possibly absent from the battery at the battle.

Posted by Jim Rosebrock at 12:12 PM No comments: