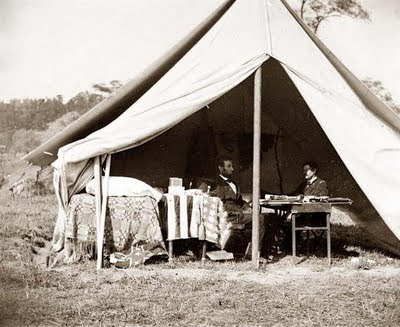 One hundred and forty seven years ago during the first week of October 1862, two weeks after the battle of Antietam, the Union Army of the Potomac and its commander George B. McClellan, still reposed in its camps around Sharpsburg, Maryland. On the first of October, President Abraham Lincoln journeyed there to visit the troops, see the battlefield, and to confer with his Army commander. The precise content of the meetings is lost to history. However the following excerpt from McClellan’s autobiography McClellan’s Own Story,Chapter XL Private Letters [Oct. 1 to Nov. 10, 1862], captures in his own words McClellan’s recollections and perceptions about the visit. It is a telling series of lines.

The air of impatience that McClellan displays here is striking. He appears surprised upon hearing of the pending arrival of Lincoln, views the visit as a waste of his days and a distraction from his most important mission of rebuilding the Army. While he seems pleased about the apparent friendliness of Lincoln, he is suspicious of the motives for the visit. Convinced that he will be pushed to move before he is ready, McClellan bemoans the politicians who don’t understand what it takes to run a field army. He returns again and again to the poor condition of the army remarking specifically on those elements of Pope’s Army now under his command.

McClellan is also a preoccupied with the Westerners who are accompanying Lincoln. He mentions them several times. Perhaps he sees the appearance of the western (and even worse, a political) general McClernand among the entourage as another attempt by Lincoln to inject a westerner into the Army (shades of John Pope).

He records a visit by long time friend, mentor and Democratic Party powerbroker William Aspinwall during the Lincoln visit, no doubt an uncomfortable moment for all three men. What is important is Aspinwall’s astute advice to McClellan regarding his position on the Emancipation Proclamation. McClellan’s instincts and initial reaction were strong opposition to it but Aspinwall sagely advises McClellan to do his duty, keep his mouth shut, and follow orders – no doubt good advice for any general in the charged political atmosphere of the time.

Finally in that last entry, there is a sign of wistfulness, a hope for one final opportunity to complete his share of the work with another “successful” battle. McClellan would not have that opportunity and instead by relieved of his command on November 7, 1862.

Here is Lincoln’s Antietam Visit in the words of George McClellan:

Oct. 1, Sharpsburg, 7.30 P.M.--…Received this morning a mysterious dispatch from which I inferred that the President was on his way hither. Went to Harper’s Ferry and found him with half a dozen Western officers. He remains at Harper’s Ferry tonight….

Oct. 2, A.M.--…I found the President at Gen. Sumner’s headquarters at Harper’s Ferry; none of the cabinet were with him, merely some Western officers, such as McClernand and others. His ostensible purpose is to see the troops and the battlefield; I incline to think that the real purpose of his visit is to push me into a premature advance into Virginia. I may be mistaken but think not. The real truth is that my army is not fit to advance. The old regiments are reduced to mere skeletons and are completely tired out. They need rest and filling up. The new regiments are not fit for the field. The remains of Pope’s army are pretty well broken up and ought not to be made to fight for some little time yet. Cavalry and artillery horses are broken down. So it goes. These people don’t know what an army requires, and therefore act stupidly…

Oct. 3.--… I was riding with the President all yesterday afternoon, and expect to do the same today. He seems in quite a good humor; is accompanied only by Western people.

Oct. 4.-- The President is still here and goes to Frederick this morning. I will probably accompany him as far as the battlefield of South Mountain, so that my day will be pretty well used up.

Oct. 5. -- …The President left us about eleven yesterday morning. I went with him as far as over the battlefield of South Mountain, and on my way thither was quite surprised to meet Mr. Aspinwall en route to my camp…. The President was very kind personally; told me he was convinced I was the best general in the country, etc etc. He was very affable, and I really think he does feel very kindly towards me personally. I showed him the battlefields, and am sure he departed with a more vivid idea of the great difficulty of the task we had accomplished. Mr. Aspinwall is decidedly of the opinion that it is my duty to submit to the President’s proclamation and quietly continue doing my duty as a soldier. I presume he is right, and am at least sure that he is honest in his opinion. I shall surely give his views full consideration. He is of the opinion that the nation cannot stand the burdens of the war much longer, and that a speedy solution is necessary. In this he is no doubt correct, and I hope sincerely that another successful battle may conclude my part of the work.

Ending on a humorous note as counterpoint to McClellan's somber words, Lincoln penned the following to his wife regarding the famous picture taken of him and the general at Sharpsburg. "Gen McClellan and myself are to be photographed…if we can be still long enough. I feel Gen. M should have no problem…"
Posted by Jim Rosebrock at 10:29 PM