A Great Addition to your Civil War Library

Every month, we see one or two new books out on the Civil War. Certainly if I had unlimited resources, I would be doing a lot more buying than I do now. So it is important to be discriminating in my purchases. Our Boys Did Nobly, John Hoptak's latest book is an important addition to the scholarship on the Battle of Antietam, the bloodiest day in American history, and very likely the turning point in the American Civil War. As a native of Schuylkill County Pennsylvania where the three regiments originated and a National Park Service ranger at Antietam National Battlefield, Mr. Hoptak brings an intimate knowledge of the terrain, soldiers, and tactics of these battles to his book. This work is not just narrowly focused on the actions of these three Pennsylvania regiments. It is also an excellent overall account of the Maryland Campaign itself. It covers the origination of the three regiments in the first year of the war and then focuses on their roles in this campaign from the opening moves of Confederate General Robert Lee in the invasion of Maryland, to Union General George McClellan’s countermoves, to the Battles of South Mountain and Antietam. 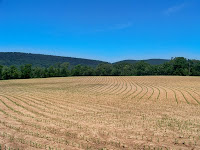 Mr. Hoptak is an excellent storyteller and his style is clear and easy to follow. Important for me, he punctuates his story with the actual times that events occur so one gets a good sense of the chronology. The work contains many never before seen first hand quotations and photographs of the participants, has an excellent and beautifully rendered set of maps by Antietam Ranger Mannie Gentile, and is extremely well footnoted. Often overlooked in the Maryland Campaign is the Battle of Crampton’s Gap (seen in the photo). It receives a very thorough telling here.

If you think this is just the story of three Pennsylvania regiments, look again. Whether new to the Civil War or a seasoned enthusiast, you will learn much about the Maryland Campaign that only an author of Mr. Hoptak’s knowledge and writing skill can offer. I highly recommend this book. Get it at the Antietam Book Store, or here.
Posted by Jim Rosebrock at 1:13 PM