Somewhere in the Middle of the Potomac River 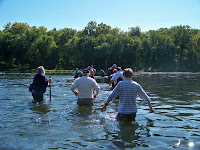 Saturday was the second annual Wading of the Potomac at Boteler’s Ford. This occasion commemorates the Battle of Shepherdstown fought on September 20, 1862. The Shepherdstown Battlefield Preservation Association sponsored the event. It included two separate wadings, the first led by Maryland Campaign historian and Save Historic Antietam Foundation (SHAF) President Tom Clemens, and the second by Thomas A. McGrath author of Shepherdstown: Last Clash of the Antietam Campaign, September 19-20, 1862. Afterward Ed and Carol Dunleavy hosted a barbeque for the hikers at their home.

I was unable to make the trek last year and was looking forward to this day for quite awhile. I was part of the first group who hiked with Tom Clemens. We were shuttled from the Dunleavy’s and dropped off on the Maryland side of the Potomac at Boteler’s Ford. Tom led us to the C&O Canal towpath where he recounted the story of Lee’s retreat on the night of September 18th and the pursuit the next day by Fitz John Porters Union Fifth Corps. We were ready to hit the water! It was a wonderful late summer day with scarcely a cloud in a gorgeous blue sky. The beautiful 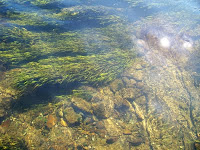 Potomac flowed majestically by us – a brown ribbon sparkling with golden flecks of sunlight. As I gingerly made my way into the river, I was surprised how warm the water was. Equally surprising was the water level – a bit deeper than I thought. It is generally a fairly smooth river bottom, one of several criteria that Tom identified for a stretch of the river to be considered a ford. Others include easy access for entrance and egress to the river, and a water level shallow enough to allow the passage of wagons, artillery, ambulances, men and horses. We were crossing a little south of a mill dam clearly visible to the right. The dam was built to funnel water into a waterway that was used as a power source for a cement factory on the (West) Virginia shore. Ahead of us loomed the heights that dominate the river ford and are a key part of the Shepherdstown battlefield. The crossing was proceeding nicely. There were a lot more underwater plants in the river than I expected. I had to watch my balance in a fairly swift current with a bit of a slippery bottom. I pulled out the camera and filmed a 360 degree panorama video in the middle of the river which is displayed below. As I neared the West Virginia


side the river bottom noticeably deepened and grew progressively muddier as I neared the shore. 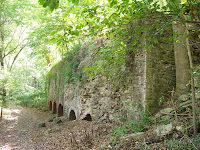 I lost my crocks in the muddy bottom but they obligingly floated to the surface for me to retrieve them. It was a little tricky extricating myself from the muddy river bottom but I managed. We regrouped and put on dry socks and hiking shoes. Tom then led us north along a river path and showed us the ruins of the old Boteler cement factory and several kilns (photo at left). Here, terrified Union fugitives from the 118th Pennsylvania cowered after their precipitous retreat back to the river caught between Confederate rifle and short fused Union artillery fire. We moved up to the River Road and saw for the first time at close range, the cliffs that tower over the river (see photo below left). The path over these cliffs taken by these retreating Corn Exchange soldiers would be the death of many of these green troops. Moving inland from the river along a draw used by advancing Union soldiers earlier in the battle Tom described the action using the fine maps from McGrath’s book. We ended up at the furthest advance of the Union line on the field where troops from Pender’s Brigade first 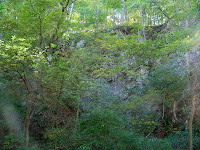 struck the Federals forcing them to start their disastrous retreat. On the way back to the Dunleavy’s we made a final stop at the Osbourn farm. The photo at the bottom left is a look north from the farm. Pender's Brigade would be attacking in that direction toward the advanced Federal positions.

This was a very well organized and informative tour of the Shepherdstown Battlefield. My hat is off to everyone in the Shepherdstown Battlefield Preservation Association for putting this together. Tom Clemens and Tom McGrath presented excellent tours and Ed and Carol Dunleavy opened their home and offered a wonderful table afterward. I can only envision that the interest and participation in the tour will be even greater next year. I know that I am already looking forward to it. 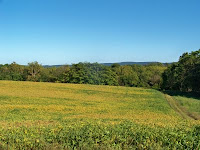 More important, today’s program has motivated me to learn more about this important battle. Tom McGrath’s book is a good place to start. I was well into it and had hoped to finish before today. And from what I have read which is over half the book, it is an exceptional treatment of this battle. Equally important is the need for all of us to support every effort to preserve a field that as Tom Clemens describes it as the place where Lee realized that his Maryland Campaign had come to an end. Learn more about it at the Shepherdstown Battlefield Preservation Association here.
Posted by Jim Rosebrock at 12:00 AM